Estimating the age of Pyrex opal glass kitchenware can most often be done by observing a few basic characteristics. While colors and styles of decoration reflected consumer tastes at the time of production, the first thing to look at is the backstamp.

On the bottom of most every genuine Pyrex opalware article is an embossed set of markings which contains a variety of information. While technically a trademark, it is most often seen referred to as a backstamp. Being embossed rather than incised, and the material being glass, it is obviously molded in rather than stamped. 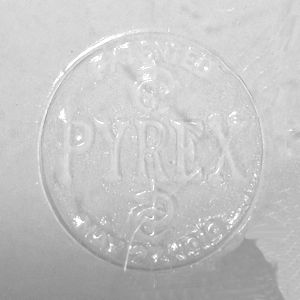 The early clear glass Pyrex ware backstamp was a simple circle with PYREX in an all-caps serif font with Corning Glassworks' CG monogram above and below. Subsequently added were T.M. REG. above and U.S. PAT. OFF. below.

A revised backstamp, with PATENTED above PYREX and MAY 27, 1919 below, was used after that date through 1924.

The CG monogram is often mistaken for and referred to by collectors as a dollar sign, albeit a backwards one. 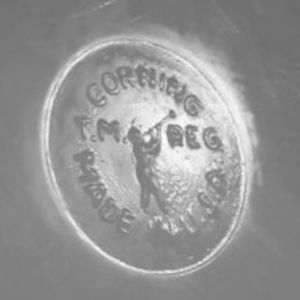 Production of opal ware commenced in 1936 after the merger with MacBeth-Evans Glass Co. of Charleroi, PA. The plant there would be used to produce a more durable messware for the military. But the product would not be branded Pyrex until the debut of kitchenware made from it nearly a decade later. The backstamp seen on various items prior to that echoes a MacBeth-Evans trademark, but one not previously used on their glassware: that of a glassblower, or "gaffer", nicknamed "Little Joe".

The configuration of the backstamp would undergo a few revisions after the introduction of opal glass kitchenware in 1945. The following are general representations of the various backstamps, which may not look exactly the same on all shapes. 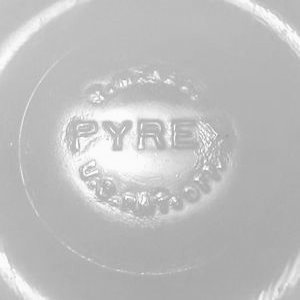 The backstamp on the earliest color ware round bowls included the word PYREX with the abbreviation T.M. REG. arched above it, and U.S. PAT. OFF. in a downward curve below forming a broken circle of sorts around the name. On some pieces, this was also enclosed in a ring. No model number or other information was included on the earliest pieces. 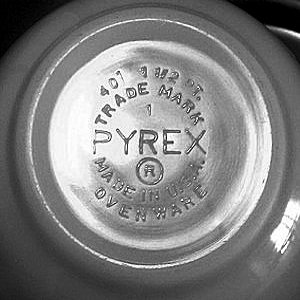 Later, most likely ca. 1950 or shortly thereafter, the registered trademark symbol "®" was added below the name, the encircling wording became TRADE MARK above the name, with MADE IN U.S.A. below. A model number and, later, the capacity in pints or quarts were added above, and OVEN WARE below.

Sometime in the late 1960s, the circular configuration of backstamps on refrigerator dishes gave way to a more straight text format consisting of PYREX ® in larger letters with model and capacity information in smaller characters above, and MADE IN U.S.A. below. 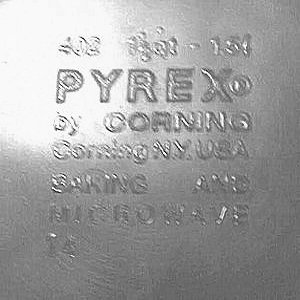 Starting in the mid-1970s, equivalent metric capacities were also embossed on pieces, therefore any seen so-marked can be dated positively later than that.

Later pieces are also recognizable by, instead of "MADE IN U.S.A.", the the wording "by CORNING, Corning, NY, USA" with the verbiage NO BROILER OR STOVETOP or, later, BAKING AND MICROWAVE below.

On many pieces, various numbers and sometimes letters are seen in and around the backstamp. These appear to be related to either molds or production runs. They are not indicative of dating.

The first pieces to have a decorative graphical pattern applied appear to have debuted in 1956. New patterns were introduced in keeping with changing tastes, so they can also give clues as to time period.

Since pattern collections and promotional pieces were available for relatively finite periods, knowing their years of introduction and discontinuance can also help narrow down dating somewhat. A listing of patterns by year of introduction can be found here. Promotional patterns may have been available for as little as a holiday season or a year, standard patterns from two years to as long as a decade in a few instances.

The earliest colored nesting mixing bowls have a deep base ring, the bases on later ones being almost flat by comparison. The older mixing bowls also have a thicker, more pronounced rim, but with no appreciable difference in capacity from later examples.

Shades of color can also be a clue to age. Variations in the red 2-1/2 quart mixing bowls encountered are owed to their differing heritages. The earliest #402 bowl was definitely more of an orange-red hue, described in advertising as "Chinese Red". The red #402 bowl supplied with the 1970s Friendship pattern collection differs from the red 402 included in the #400 multi-color mixing bowl set, although it is similar to the shade of the earliest red 402s of that set. Side by side comparisons, however, are often necessary to distinguish among them.

From the time of introduction, the #400 nesting mixing bowl set was offered only as a set and in the original colors. It was not until a few years later that the largest bowl was offered in open stock and also in red. Any 4-quart #404 bowl in a color of other than yellow must therefore be dated no earlier than 1949.

The design of #500 series refrigerator storage dishes' lids can help determine their age. From 1947 until approximately 1959, the lids' tops had longitudinal ridges flanking a smooth middle, and had smooth undersides. After 1959, the top surfaces were smooth and the undersides were fluted lengthwise. #500 dishes sold in 1959 and after in any color or patterns, therefore, should have the later style lids. Bear in mind, of course, that either style lid will fit any dish of corresponding size, so one can never assume a lid was originally sold with its dish unless it is found as new old stock.

Clear glass #500 series refrigerator storage dishes were made both in the late 1940s and in the early 1980s. The different backstamp styles, consistent with the era of manufacture, serve to identify from which timeframe an individual example was made. Lids original to each would also be period correct.

Since the Cinderella design pieces were first introduced in 1958, they must all date from then or after.

The #063 oval divided dishes made before the mid-1970s were not marked with a model number.

All Pyrex color ware was discontinued after about 1986.