Pyrex by Corning Glass Works may have been the first domestic and, ultimately, the most successful of the heat resistant glass kitchenware, but there were some other notables who fought for a share of the market.

Many were legitimate competitors. Others copied Pyrex design and decoration in what appears to have been the intent to potentially be mistaken for actual Pyrex.

Anchor Hocking began marketing their Pyrex-like line of ovenproof borosilicate glassware in 1942. Sold in sets or open stock, it could also be had by way of grocery store premium give-aways. Like Pyrex, its manufacture was switched to tempered soda lime glass. Most recognizable among its varieties is Jade-ite, a pale creamy green-tinted milkglass (not to be confused with jadite, a jade-green shade of vaseline glass marketed earlier in the century).

In addition to plain white, also produced were Azur-ite (pale blue milkglass), Rose-ite (pink), as well as a fired-on finish called Lusterware (in several colors including the popular peach) among others.

Founded in 1900, converted to mass produced manufacturing in the 1920s. After many successful years, sales waned in the 1960s. Attempts at reviving demand in the 1970s fell short, and the company closed its doors in 1979. Some later molds were acquired at auction by Indiana Glass Co.

Gemco produced tableware with designs close enough to Pyrex to be mistaken for it. Salt & pepper shakers, sugar bowls & creamers, syrup dispensers, etc, were made with decoration extremely similar to Pyrex Compatibles and other patterns. Packaging even mimicked that of Corning, but with a fine print disclaimer "Not A Product of Corning Glass Works".

Founded in 1902 in Washington, PA, by the merger of four companies, Hazel Glass and Metals Co., Atlas Glass Co., Wheeling Metal Plant, and Republic Glass Co. By the 1930s, the company had grown to fifteen plants across the country, producing decorative depression glass as well as a variety of glassware for commercial packaging. Purchased by Continental Can Co. in 1957, the acquisition was the subject of a government action claiming violation of the Clayton Anti-Trust Act.

Formed in Jeanette, PA in 1908, after already having been established in the glass business in a handful of other ventures, the McKee Glass Co. in 1917 introduced Glasbake brand glassware. Initially dubbed "Glasbak Ware", it was changed to "Glasbake" sometime thereafter. It appears there was some early ambivalence on the part of McKee; the logo, even when spelled "GLASBAK", has a blank space sufficient to fit the final "E". 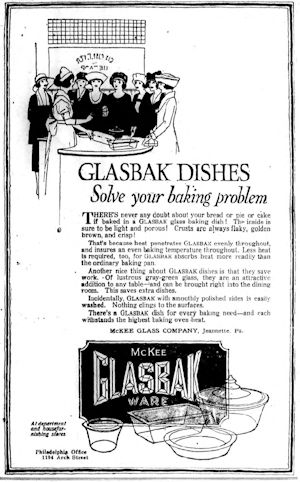 Characteristics of "Maid Of Honor" brand kitchen glassware sold by Sears Roebuck & Co. are indicative of McKee as the OEM.

Formed in 1896 as the Beatty-Brady Glass Company. In 1899, merged into the National Glass Combine consisting of nineteen glass companies. Name changed to the Indiana Glass Co. in 1904. Company sold in 1907, after the failure of the National Glass Combine. Indiana Glass was able to sustain demand through and beyond The Depression and managed to survive acquisitions and other market shifts before Dunkirk operations were shut down in 2002. The Indiana Glass name, however, continued to be used by the company last owning it.

Rigopal Horno brand made in Argentina in the 1970s under license by Corning. Colors, shapes and decoration mirror those of Pyrex, but in unusual ways.

Borosilicate glassware still made in Brazil. Many pieces virtually identical in design to current and classic Pyrex ware. Some questions as to insufficient boron content have been raised.

Producing glassware in Mexico since 1909, name changed to Crisa in 1995. 1997 joint venture with Libbey led to acquisition by Libbey in 2006. Most often seen decorated opal ware has pattern named or at least called "Brown Daisy". Other patterns often confused for Pyrex or Corning.