Even the most casual Pyrex enthusiast is probably familiar with the Refrigerator Storage Dish Sets with bright primary colors matching those of the iconic Multicolor nesting mixing bowls. From these first color ware sets came a bevy of paint shade and decoration combos to coordinate with nearly every standard pattern collection. If you want to collect them, there are a few things you may want to know.

The colored opalware sets were actually not the first Pyrex refrigerator dishes. Although the color ware sets were introduced in 1947, quite differently-shaped clear versions had been around intermittently since 1925.

The early clear dishes originally came in four different sizes: both a 2"-shallow and a 3"-deep 6"x6" square, and similarly shallow and deep 5"x9" rectangles. Top dimensions of the dishes were such that one lid fit either a deep or a shallow of its same width and breadth. The deep rectangular dish was also marketed without lid as a loaf pan. At some point, with the addition of a lid, a 4"-deep 5"x9" loaf pan was also called to serve as a refrigerator storage dish.

All were available in sets or individually. Originally, none had handles. Different sizes were discontinued at different times, but none appear to have remained in production past WWII.

The colorful sets introduced in 1947 as an "Oven-Refrigerator Set" were produced, except in rare cases, in painted and/or decorated opalware. In contrast to the early clear models, they consist of four dishes in three sizes, the two small dishes and one medium dish sized to stack side by side neatly atop the large. 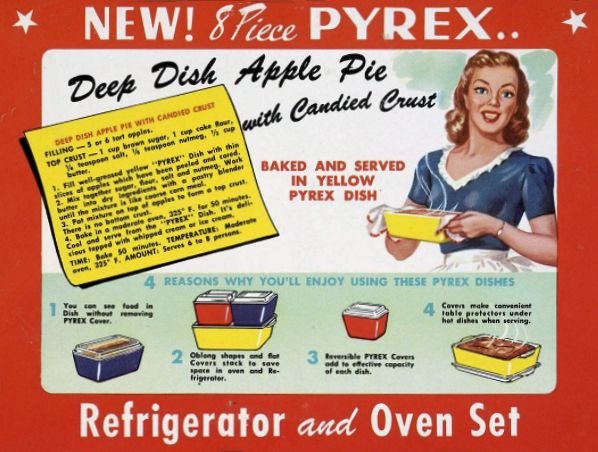 So popular was the new refrigerator set that, by Spring 1948, one newspaper had four different dealers' ads plus a half page national ad for it all on the same page.

Of the three sizes, only the largest dish and its lid have handles. Its shape is reminiscent of the tab-handled early clear Pyrex model 231 utility dish.

Open stock dishes designated 510 and 512 of the same sizes as the 501s and 502s are known in clear glass, dating to around 1949. A set in clear glass containing all three 500 series dishes was available in the 1980s as a #5000 Bake 'N' Store Set. Dishes from the two time periods can be differentiated by the unique backstamp versions in use during each of those timeframes. The earlier versions should also have come with the original style ridged-top lids, as opposed to the fluted-underside type provided in the 1980s.

The original Multicolor red/blue/yellow #500 set no longer appeared in catalogs 1967 and after.

The last #500 color ware set produced was in the Autumn Harvest pattern in 1979. The updated patterns Butterfly Gold ('79) and Spring Blossom Green ('79) also debuted that year with only a limited array of models, but did not include refrigerator dishes.

Also known to exist, and apparently from the mid to late 1940s, are some color ware dishes slightly different in size from the #500 set pieces. They appear to have come with lids similar to the early ridged-top style, but with the ridges instead down the middle and with "PYREX" embossed at center. These dishes are extremely rare, and may have been the prototypes known to have been distributed on a limited basis for product development purposes prior to the introduction of the #500 color ware sets in 1947.

Other unusual unpainted or undecorated #500 series dishes include a brown-tinted clear Fireside set also from the 1980s, and some 501s and 502s seen in Delphite blue apparently of Canadian origin and likely from the late 1940s to early 1950s. The Delphites are also seen with both clear glass and blue tinted opal lids, the latter of which appear to be confined to the older, ridged-top style.

As alluded to above, there were different regular production lid styles for the color ware sets. Of the two types, the earlier design can be identified by its top which features longitudinal raised ridges flanking a smooth center band. The later style has a smooth top and an underside with wide-spaced, longitudinal fluting. The change appears to have taken place around 1960, so it can be assumed that #500 sets introduced after that time-- including all those for the standard patterns except Multicolor, Pink, and Turquoise-- would have come with the later design lids. Pink and Turquoise sets should always have the older style lids; the Multicolor can have either, depending on when they were sold.

There is another style lid you may encounter. It has the fine ridges like the regular early lids, but which completely span the top. Some may have a raised circle as well. They are not rare or a prototype. Close inspection reveals them to be marked "arcoroc FRANCE", made by Arc International the European licensee for Pyrex. Their dimensions are such that they fit the US version 502s quite nicely. The dish they are originally supplied with, however, is shallower than a Pyrex 502, and is often seen called a butter/cheese dish.

Plain opal sets exist, apparently from the same mid-1950s timeframe as the plain opal nesting mixing bowls. Like the bowls, the refrigerator dishes also have no backstamp, only a mold number. They, also, would have come with the ridged-top lids.

If you are collecting a set one dish at a time, you will obviously want to assemble one in which the pieces are a match. Besides the different lid styles, there are a couple of other factors to bear in mind.

If you're very particular, you'll also want to pay attention to and match the backstamp styles, which varied on those sets that were available over a span of many years.

There is a variation in the molds used to make the 500 series dishes, which can be seen mainly in a height difference of about 1/8". The slightly taller dishes can be identified by an outer top edge which bevels back toward the interior, as well as small triangular flat areas just outside each of the four corners of the foot rim. Empirical observations indicate these to be older, as some lack "Made In USA" in the backstamp and the shade of red on the 501s is sometimes more akin to the orange-red of the first 402 bowls. They also all appear to have mold numbers in the form of "A-nn" while the other type have either "B-nn" or a model number with leading zero, e.g. "0501". Since the beveled rim is painted and the paint is frequently seen worn off there, it is likely the design was found lacking in cosmetic durability and was changed. 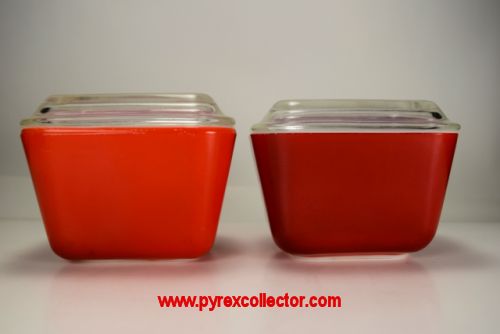 The clear 501 and 502 dishes sold in the very late 1940s to very early 1950s are also seen in both versions. Since they are absent from the 1953 catalog and later, we may safely assume the change occurred before that time.

There is also another set that is somewhat qualified to be included in the category of refrigerator storage, the #550 Oven-Freezer-Server set. This set consists of a 548 and a 575 Space Saver casserole, one glass lid that fits both, and two flat aluminum covers. The metal covers were to be sealed with freezer tape before freezing. Finding these sets complete, especially with the metal covers, is rare.

There are clear dishes which are sometimes mistaken for refrigerator dishes. They are actually inserts for counter-top electric roaster ovens marketed by third parties in the 1940s. Similar in size and shape to the medium and large 502 and 503 color ware dishes, they are numbered 0377, 0378, and 0379 on the large dish, the medium dish, and the medium lid, respectively. The large dish has no lid, and the 0379 lids have no ridges or fluting. The large dish and the medium lids each have small tab handles.

Collecting just "fridgies", as fans call them, can be a unique way to collect Pyrex. Since each was typically made to go with a given pattern collection, a four dish set often embodies the color and decorative elements of the entire pattern, all in a compact group of pieces.

Other than the exceptions noted above, lids are always clear glass.

In 1977, the Spring Blossom Green #500 set was subtly redesigned, making its decoration elements slightly smaller and a bit more symmetrical, particularly in terms of the distribution and number of white flowers on the 502 and 503. When individual pieces are found, the difference can most easily be told by simply counting the dots. Five dots total (per side), both solid and outlined, on any size piece indicate the original version. Any other number of dots, and the dish is of the revised design.

Decorated opalware refrigerator dishes were discontinued in mid-1981, so Woodland and Autumn Harvest had their #500 sets' lifespans cut short, and Forest Fancies, Shenandoah and Colonial Mist would not include them.